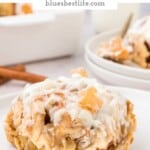 Gooey cinnamon rolls fresh from the oven are a treat during the holiday season! Make these easy cinnamon rolls that have the added bonus of apple pie filling rolled inside. Top the warm cinnamon rolls with a cream cheese frosting for a treat the whole family will love!

Why These Apple Pie Cinnamon Rolls are the Best!

Freshly baked cinnamon rolls are a special treat, but sometimes there is not enough time to make the homemade cinnamon rolls completely from scratch! That's where the help from a can of cinnamon rolls comes in handy. With this cinnamon roll recipe, there's no instant yeast to deal with, no waiting for the rolls to rise, or the need for a rolling pin. All you need are 3 simple ingredients for a delicious breakfast, although really this could be considered a dessert recipe!

What I love best about these apple cinnamon rolls, besides how is they are to make, is how you can take something store bought and with just a few ingredients make something that is special enough to serve for a holiday breakfast or dessert. When I have family visiting, I love to cook special meals for everyone. However, spending countless hours in the kitchen is not ideal. I want to enjoy time with my family, so getting a little help with store bought cinnamon rolls is the best way I can manage both.

This apple cinnamon roll bake smells absolutely amazing while it's baking in the oven. Trust me, no one will know you didn't wake up at 5 am to make the homemade rolls, but they will have a smile on their face when they see this breakfast bake come out of the oven!

cream cheese- this is completely optional, however I love adding the cream cheese to the icing that comes with the rolls.

Preheat your oven to 350 degrees and lightly spray a baking dish with cooking spray. Prepare the apple filling. Chop the apples into very small pieces. This will make it much easier to roll the cinnamon roll back together.

On a clean work surface, roll the cinnamon roll dough out while keeping the sections tightly together. Spread the diced apples over the cinnamon sugar. You will not need an entire can, save the remaining apples to serve on the side or maybe on top of some vanilla ice cream

Carefully roll the cinnamon rolls back together. This is a little messy because they do have a lot of cinnamon on both sides of the roll. Once rolled back together, remove each cinnamon roll section and place in casserole dish. The easiest way to do this is to find the individual sections and carefully separate by hand. You may need to tuck a few pieces of the apple mixture back inside the roll.

Use a spoon or a spatula to smooth the frosting over the cinnamon roll apple bake.

Store leftover cinnamon rolls in an airtight container or cover with plastic wrap for 2-3 days. Because of the cream cheese frosting these must be refrigerated. When reheating the next morning, microwave for 30 to 60 seconds.

Looking For Other Easy Recipes? Try These!

Did you try this recipe? Please let me know what you think! Leave a comment below, and a 5- star rating. I would love to hear from you! Subscribe Here to get new recipes sent straight to your inbox! 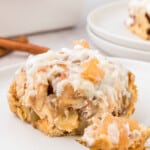 Print Recipe
No ratings yet

When making this recipe with premade cinnamon rolls, you must buy the Pillsbury "Grands" cinnamon rolls because they will completely unroll while the other variety does not.  I have not tested this with other brands.