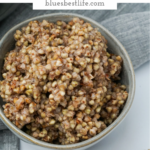 What makes these buckwheat grouts the best!

Buckwheat grouts are quick and easy to make and have a subtle enough flavor that they can be eaten as a breakfast cereal or a side dish.

Buckwheat grouts are actually not a true grain but a seed from a flowering plant and are not at all related to wheat.  These seeds are consumed the same way as grains which is why they are considered a “pseudocereal."

Because buckwheat is a seed and not actually a grain it is gluten-free!  They make all different varieties of food from buckwheat because it is a great alternative for anyone with celiac disease.   Buckwheat flour can be used to make buckwheat pancakes, buckwheat noodles or soba noodles and many other buckwheat recipes.

buckwheat- raw buckwheat groats are sold in packages at most grocery stores in either the cereal or baking isle.  You may also look for buckwheat kasha which is already toasted.

olive oil- substitute any oil you prefer like coconut oil or avocado oil.  You can substitute unsalted butter or even vegan butter.

Buckwheat has an earthy flavor with a little bitter background.  Toasting it will bring out a nutty flavor.

Buckwheat has many amazing health benefits.  It is a great source of potassium and also has all 9 essential amino acids.

There are many different methods for cooking buckwheat but the easiest way is in a large deep sided skillet.  First start by adding a cup of raw grouts to a dry skillet.  Toast over medium heat stirring occasionally.  This will only take a couple of minutes.  You will begin to smell the nutty aroma.

Once grouts are toasted add 2 cups water, olive oil and salt.  Bring the water to a boil, then reduce to a simmer and cover.  Set the cooking timer for 10 minutes.

After 10-12 minutes remove the lid and stir.  The water should be mostly absorbed and the grouts will be tender.

How to serve buckwheat

There are many different ways to serve cooked buckwheat grouts.  Make a buckwheat salad, eat as a hot cereal or a side dish like rice.

How to store raw buckwheat

It is best to store the grouts in a cool dry place.  Keep bag of buckwheat sealed in an airtight container in the pantry.  A great way to keep them fresher longer is to store in the refrigerator or freezer.

looking for other delicious recipes?  Try these!

Did you try this recipe? Please let me know what you think! Leave a comment below, and a 5- star rating. I would love to hear from you! Subscribe Here to get new recipes sent straight to your inbox! 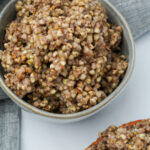 How to Cook Buckwheat Grouts