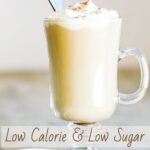 A Homemade Eggnog Latte is a festive holiday drink.  My lighter version of eggnog has the same flavor with less sugar and calories than the traditional recipe.  Add a little liqueur for an extra dose of holiday cheer!

I do enjoy a little spiked eggnog around the holidays.  Unfortunately it’s loaded with so much sugar and heavy cream that I avoid indulging often.
With the popularity of Starbucks eggnog latte I decided to try making a low calorie and low sugar version to add to my coffee in the morning.  To my surprise this homemade eggnog latte recipe was extremely easy and still had the flavor of traditional eggnog.

I wanted to make my own eggnog to control the calories and the sugar.  Traditionally eggnog is made with whole milk, heavy cream, sugar and eggs.  By using the almond milk and stevia I was able to make a version of eggnog I felt less guilty of drinking.  The taste was surprisingly similar and it even thickened up after it cooled!

How to make eggnog latte?

I prefer to cook my eggnog.  While I have seen traditional recipes that do not require cooking, I feel a little odd drinking raw egg.

Start with a small sauce pan on medium heat and add almond milk, cream, vanilla, stevia, nutmeg and a pinch of salt.  Bring this to a simmer while stirring.  In a small bowl separate the egg white from the yolk.  You can save the white for another use or discard.  Whisk the yolk to a creamy smooth consistency.

Next you will need to temper the egg yolk.  Don't worry! This is not complicated, it just insures we don't end up with scrambled eggs!  Take a spoonful of the milk mixture and add to the egg yolk while whisking, repeat this a few times a spoonful at a time.  Then add the egg yolk mixture to the pot of warm milk on the stove.  Heat till it is just beginning to come to a slow boil and remove from heat.  Pour into a jar and allow to cool in the refrigerator.  It will thicken as it cools.

Once the eggnog has thickened you can make your latte.  You can use espresso or strong coffee, remember a latte is a mixture of coffee with steamed milk (in this case eggnog).  Add your coffee to a mug and spike it will a shot of liquor of choice (optional) then stir in your eggnog and top with a little whipped cream (optional) and a sprinkle of extra nutmeg.

What alcohol do you spike eggnog with?

Traditionally brandy is used to spike eggnog, however you can use rum or whiskey.  A Christmas Eve tradition at the office where I work at has been serving eggnog with spiced rum.  So I decided to stick with spiced rum for this Homemade Eggnog Latte recipe.  If you prefer to omit the alcohol the latte will still be quite tasty!

How does this Eggnog latte compare to the coffee shops?

After doing a quick comparison of the nutrition facts from Starbucks Eggnog Latte and mine the numbers are remarkably less.  The sugar and carbs are the most obvious differences!  Check it out for yourself and compare!  I think you’ll agree this version is a little more friendly to the waist line! 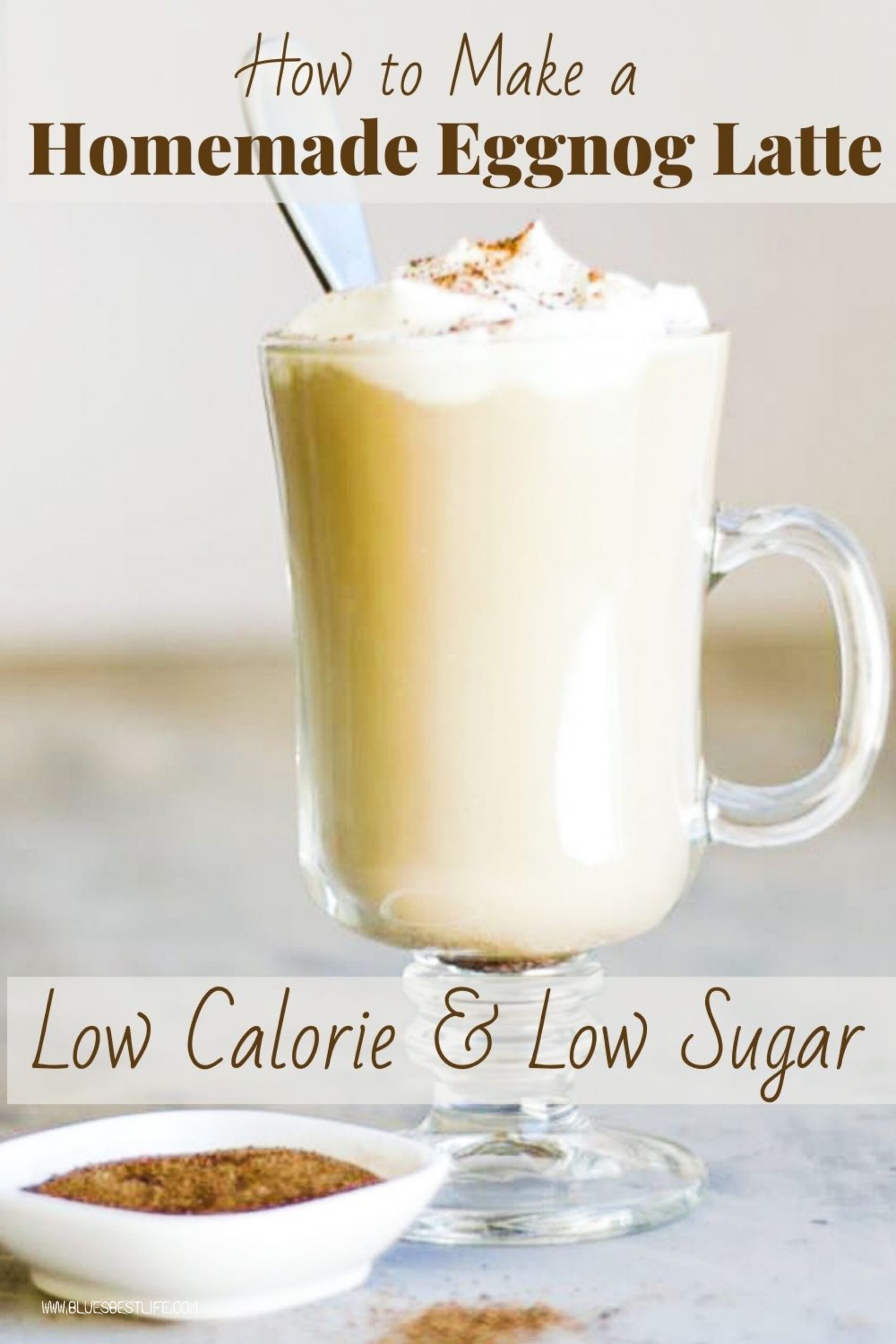 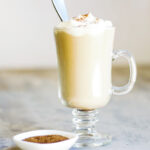 Print Recipe
No ratings yet

*You can completely chill eggnog and serve cold or leave warm for latte.
*The eggnog recipe can be made ahead and stored in an air tight container in the refrigerator for 3-4 days.
*Calories are based on 1 latte without alcohol or whipped cream since that is optional.

More recipes you may enjoy